Exciting Brandy news for stans like me! Firstly, interspersed are pictures from the set of the Little X.-directed video to her awesome anthemic comeback single “Right 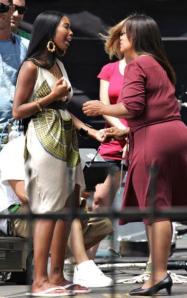 Here (Departed)” which will apparently debut on September 3rd on BET’s “Access Granted” hopefully along with a lot of massive promo for the album starting with a confirmed appearance on Oprah Winfrey‘s show. Big things for Brandy indeed! I’m happy Epic don’t seem to be fucking around with this talented girl like a lot of record companies have been doing with their artists recently, I hope they pull out all the stops for the promotion of this project as Atlantic failed to for the last album. Although its a dead cert Brandy will bring the heat musically as she has done for the past decade in the business, I want her to do well commercially so as many people as possible can see again how talented she is and for her success to overshadow her whole turmoil of the past couple of years like Mariah did with “Emancipation”, which has now made people totally forget about her breakdown. Can’t wait for this video – I love the song, can’t wait for the comeback and Brandy looks damn beautiful – the weave (for once) is 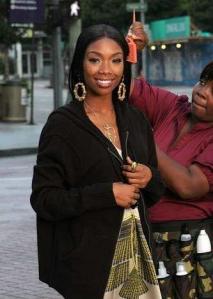 on point and I love that dress, she’s stunning! Rodney Jerkins himself and (annoying) brother Ray-J will also make cameos. Regarding the video’s concept, I’m definitely intrigued as although the song is fantastic; its concept is a pretty “boring” one in video terms, by what Brandy herself said:

“You can take it like you’re talking about a mother and a daughter, a sister, brother, girlfriend, whatever – its universal in that way. And the video concept is me crossing over to the other side and coming back into my family’s life. Just popping up everywhere, just singing to them. Sometimes you see me on the street by myself completely, and it’s pretty cool. I’m really excited about it. I just hope it turns out great and everybody loves it.”

Aww she seems so genuine and lovely just from this, I’m sure all the Brandy stans will love it but considering how cool the concept sounds and the fact Epic have hired massive director Little X., I hope its a hit on the mainstream video channels too. More quotes have als 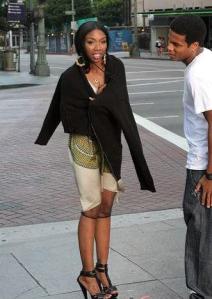 o been flowing about the album project, talking about the single’s production (always welcome for me) Brandy says the track was her and Rodney‘s “re-connect”:

“It was the first song I did with him” “It’s our first single. So our experience this time has been very magical. Our sound is a little bit different from our old sound, but we are back, and I’m never leaving Rodney again”

Glad to hear it Bran Bran, we never wanted you to part anyway after the masterpiece that was “Full Moon”, but things happen for a reason and we got the classic collabo with Timbo & Candice that is “Afrodisiac” so definitely wouldn’t have changed things for the world!

The second bout of good (not just so we can be impatient and hear something but because I don’t think leaks truly damage sales, they increase anticipation for a project, bad promotion does that…) news is that not one, not two, but THREE full tracks recorded for the project have surfaced! The first is the full version of the previously leaked in snippet form “First & Love” which

is unconfirmed but likely to be produced by someone who’s moving up on my list of new producers: Hit-Boy after collaborating with my favourites The Clutch on Jennifer Lopez’ “Forever” and the awesome Balewa Muhammad demo “100”. His production on this track definitely echos those two tracks when the chorus comes up with the bouncing echoey steel drums but again he comes up with something fresh and unformulaic with the playground-like handclaps and shouts of “hey!” sounding fantastic combined with the light strings. The arrangements, along with the fact that Hit-Boy is now a frequent collaborator, have also definitely hinted to me that this is also one of the first leaked Clutch collabos. With the quirky phrasing of her vocals on the “felt it beating like a base….drum” lyric, the light echoed call-back-and-forth background vocals and the quirky lyrics even just down to the “Ray-J asked where I met ya” lyric even, I’m almost certain this is a Clutch joint.

“Porcelain Doll” is definitely my standout by far of ALL the tracks leaked up to now. My god, this is just Brandy at her best. The track is so euphoric, the production sounds like something Danja might craft, the opening “My Love”-style synths, haunting with the warped vocal sample and so understated that its awesome, simply some light fading in and out strings and a thumpin

g basic drum pattern which allows what always makes a good Brandy track, the vocal arrangement, backgrounds, phrasing and lyrics, to shine completely. The chorus just bangs and hits hard after the soft call-back-and-forth verses and reeks to me of The Clutch and my girl Candice Nelson, with the “duffle bag” and “porcelain doll” weird objects for a normal writer but for The Clutch, masters of originality, is completely normal! The control on her voice is also amazing on this track and what us Brandy fans love her for, the way her tone changes from the start when she commands a throaty delivery to the end, where she has almost lowered to a whisper on “haard”. Just listen closely to the layering on those chorus vocals too and the background vocals towards the end, I could go on forever but as with the best Brandy tracks the standout feature here is the vocals, my girl rocks with the BEST when it comes to vocal arrangement, she just sets a new standard.

The final leaked track I’ve left ’til last as my least favourite, although as with most of Brandy’s tracks, as the R&B chick who sets the highest bar, is far from mediocre! From the start of “T

hrow It All Away” I get a 90s-throwback vibe from this one, the intro is gorgeous and throws you off-guard for the funky, pulsating production and commanding vocal delivery therein. The bridge/chorus takes us once again back down a tone, more like a constantly occurring bridge to combat the fast moving, skittering beats and strings in the verses, definitely effective as the song never therefore runs out of steam. Brandy‘s vocals aren’t the main focus here which is probably why I like the other two tracks better but we still have that classic echoey, soft layering from the girl who invented layering and using her voice as an actual instrument.

After hearing these tracks I’m even more amped for the project and hope everyone else is getting geared up to grab this release as soon as it hits the shelves as I am. I really want Brandy to become the household name she was back in the “The Boy Is Mine”-era and hope Epic pull out all the stops for her promotion as they seem to be doing because she is the singlemost talented vocalist in the R&B game today imo, yeah its a big claim when we have powerhouses like Mariah, Leona, Mary and Beyonce around but on a technical 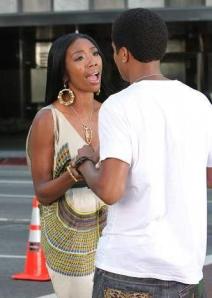 level, on the detail of her vocals and the dedication she seems to have to arranging them to full effect, Brandy is way ahead of the game and second to none. As someone who doesn’t even often write her own tracks and doesn’t have the luxury of a long vocal range this is no mean feat because she makes every track her own through her arranging. Candice Nelson comes a close second and that’s why these two are a match made in heaven for me and why I can’t wait to hear an album I hope is full of collaborations between the two, as “Afrodisiac” was. The fact that the other Clutch members are also involved this time, when they always bring out Candice’s strongest work, makes the prospect even more exciting! Bring on November 11th and maybe a push-forward for once? Pleeeease! 🙂 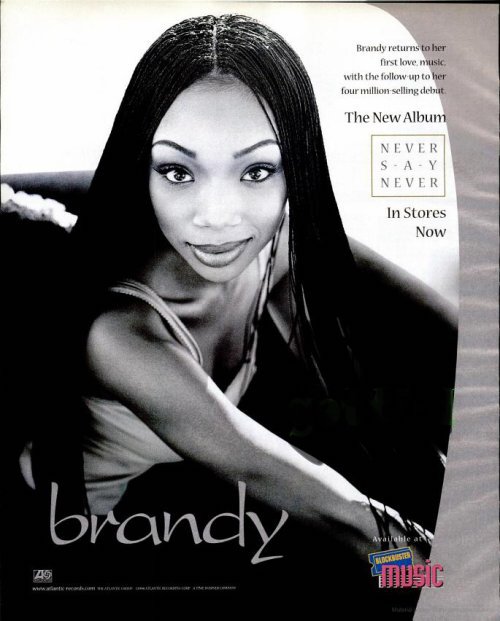 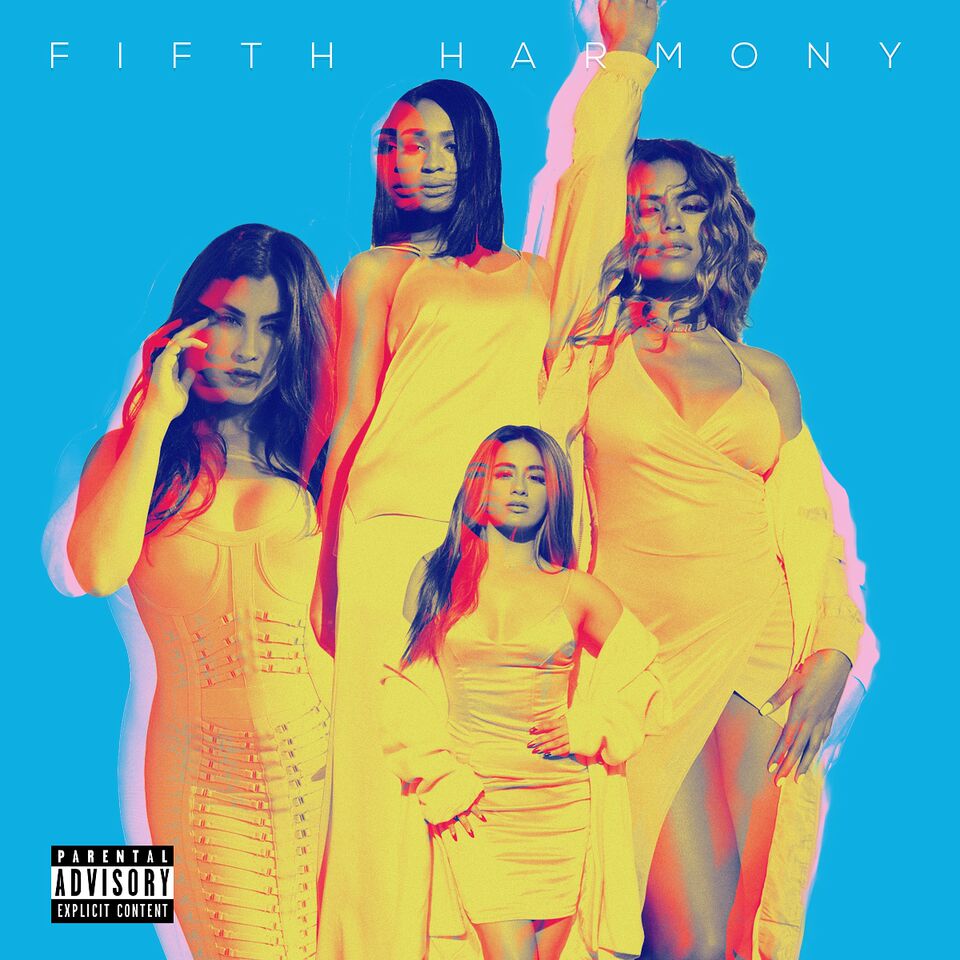 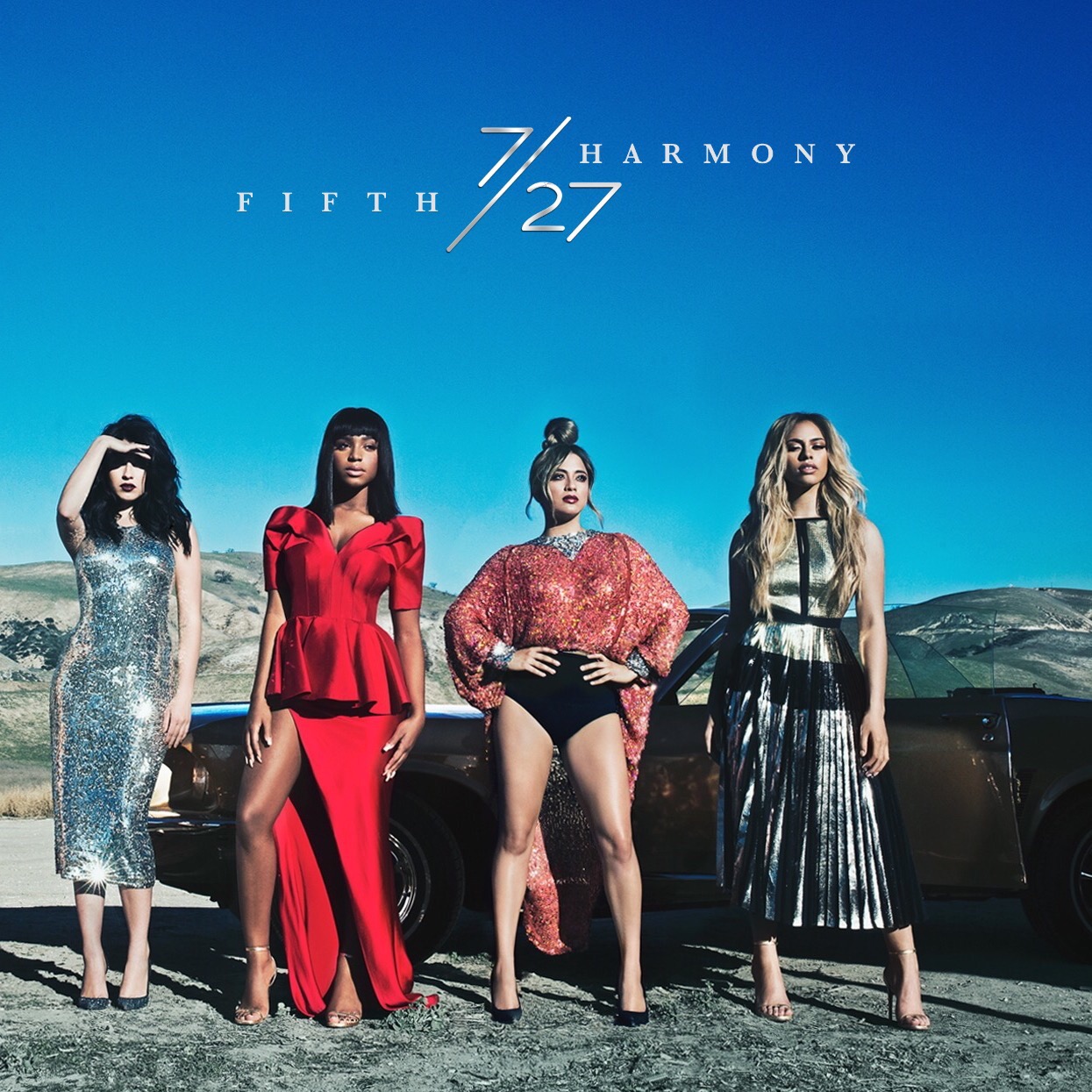